Unless you’ve been living under a washing machine all this time, you’ve undoubtedly heard the kerfuffle where Facebook was recently caught selling the personal information of over 50 million people to a marketing firm.

I'm not surprised-- saw this coming a long time ago.

So did Facebook Dear Leader and CEO, Mark "The Zuck" Zuckerberg. Here's an exchange between The Zuck and a friend shortly after founding Facebook:

Zuck: Yeah so if you ever need info about anyone at Harvard

[Redacted Friend's Name]: What? How'd you manage that one?

Zuck: They "trust me"

Hello? Is this thing on?

And, not to say I told you so but… I TOLD YOU SO! Yep, Master Samurai Tech Radio Episode 23, February 8, 2018, I called out all of this and more. I explained that Facebook is scraping all your personal content and interactions with the site in order to build a marketing profile on you and sell this to big marketing companies and government intelligence agencies. THAT’s why it is “free.” In reality, it’s not free. That’s because you’re giving up tons of personal, private information about yourself. Yep, I explained all that right here, starting about 35 minutes into the show (the video below will start playing at that time):

In other words, you are whoring out your personal information so you can watch your niece's dance recital or yak with your "friends."

And I’m here to tell you, what you’ve heard on the news about Facebook is only the tip of the iceberg. People with lots of degrees and initials after their names get paid Big Bucks to design the Facebook platform to psychologically manipulate you and keep you addicted and interacting.

Even what you do and say in “private groups” becomes part of your profile and is used to compile a dossier on you. This can be used for all kinds of nefarious purposes ranging from political campaigns to “outing” people for having opinions that are deemed unacceptable or politically incorrect by The Powers That Be. Consequences could include the loss of your job, negative affects on your business, legal harassment, jail or, in the future, "re-education."  Some police departments around the country are already using artificial Intelligence (AI) to mine data and predict crime. And guess what: they suck at it! Unfortunately, the consequences of a mistaken SWAT raid are rarely benign.

But it may even go way beyond that, as I explain in the podcast-- there are credible reports that they’re also manipulating you physiologically by modulating the electromagnetic field (EMF) of your smartphone to influence your brain waves. Who knows what will come out in the next 5 years. You heard it here first!

Facebook’s recent data dump scandal is actually damage control covering for something far worse. It's a controlled release of some bad information in order to avoid fessing up to the really bad shit they’ve been doing.

People with the inside tech scoop are deleting their Facebook accounts leaving the naive on the plantation. Has the exodus has begun? Let’s hope so. And I’m doing my small part to get the word out. In the words of the Prophet Jeremiah, "Come out of her, my people!"

Is Facebook ZUCKing itself into oblivion? It's not unthinkable. Remember that failed Facebook predecessor, Myspace? The graphs below shows how the search volume at Myspace reached a peak and then drifted off into oblivion. Could it happen to Facebook? Well, so far, things are looking pretty similar: 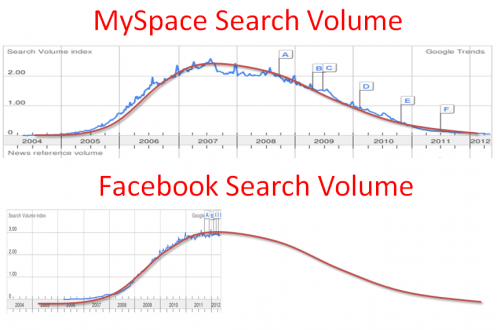 Nothing on the Internet is really free-- you are paying somehow. If not with money, then with personal information. That’s why you pay for premium access at Appliantology. Appliantology is part of the free-range Internet (meaning we're off the corporate plantation): no data harvesting, no profile scraping, no compiling dossiers, no selling you as a product to big marketing firms.

If you still choose to have a Facebook account, do so with the understanding that they are trying to Zuck you. It’s called the Zuck n’ Jive.