You're probably familiar with the term "split-phase motor", but do you actually know what it means? That's exactly what we'll dive into in this post.

The whole trick with motors on single-phase, standard household power is how to get them going from a dead stop. Once the rotor is spinning, it'll keep going happily as long as power is applied to the motor winding. But without a little engineering, single-phase power won't get a motor spinning -- it'll just hum and twitch in place.

The trick that engineers came up with oh-so long ago was to introduce a second winding to these single phase motors -- the start winding. So you now have a start winding, whose purpose is only to get the motor running, and then you have the run winding, which is what keeps the rotor spinning once it's moving. This setup of start winding and a run winding is what we call a split-phase motor.

But how is it that that start winding kicks the motor into gear? Well, it all has to do with one simple fact: a motor on single-phase power simply cannot start without some help. So what the engineers needed to do was figure out how "split off" (get it?) a second phase from the single phase power supply.

Before we get any further, let's talk about what phases are as it relates to AC power. You know that AC alternates between positive and negative, and that we represent this with a sine wave, like so: 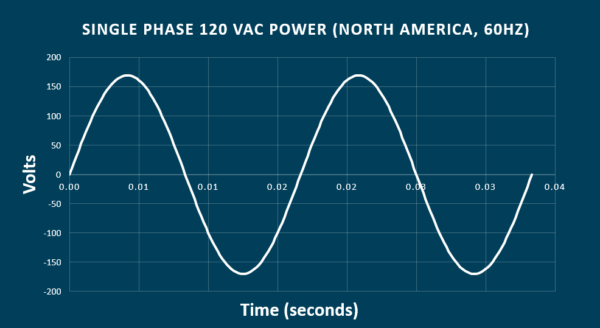 On that sine wave, you only have one line alternating up and down. One line = one phase.

In order to split a second phase off of this single one, we use a property of the coils that make up motor windings called induction. Don't worry if you aren't too familiar with inductive components in circuits -- we'll just touch on the basics.

This means that, even if you apply the same single-phase power to two different windings, you could get different current sine waves in those windings. It all depends on how those windings are constructed and how inductive they are relative to each other. Take a look at this schematic of a typical split-phase motor as an example. 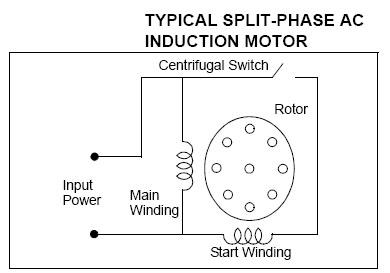 This sine wave shows exactly that. The sine waves for the current through each winding is different, and that difference creates a phase separation. 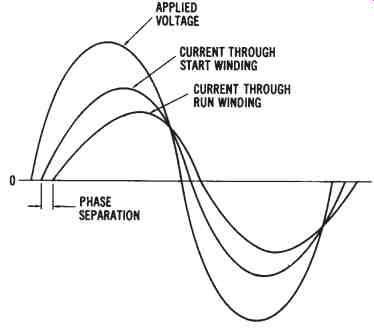 So how does all this about induction and phases help us get the motor started? It's because when current passes through a coil, it creates a magnetic field. And if you make two magnetic fields with different phases, those fields will push on each other. That push is all we need to get the motor started. Once it's running, it'll keep chugging just with the single run winding energized.

This is the principle that all split-phase motors operate on, so don't be confused if you see slightly more complicated configurations. They all work in this same way. Those extra components (such as capacitors) are just added in to increase the motor's efficiency or starting torque.

Want to learn more of the in-depth technical knowledge you need to be an ace tech? Click here to enroll in our Core Appliance Repair Training course today.