Here's something you don't see every day: a gas range that is powered only by a 9 volt battery. Pretty nifty, huh? @Littletexan told us about his encounter with this one in this post from a couple weeks ago.

Let's look at some of the unique aspects of this model. We'll start, as always, with the schematic: 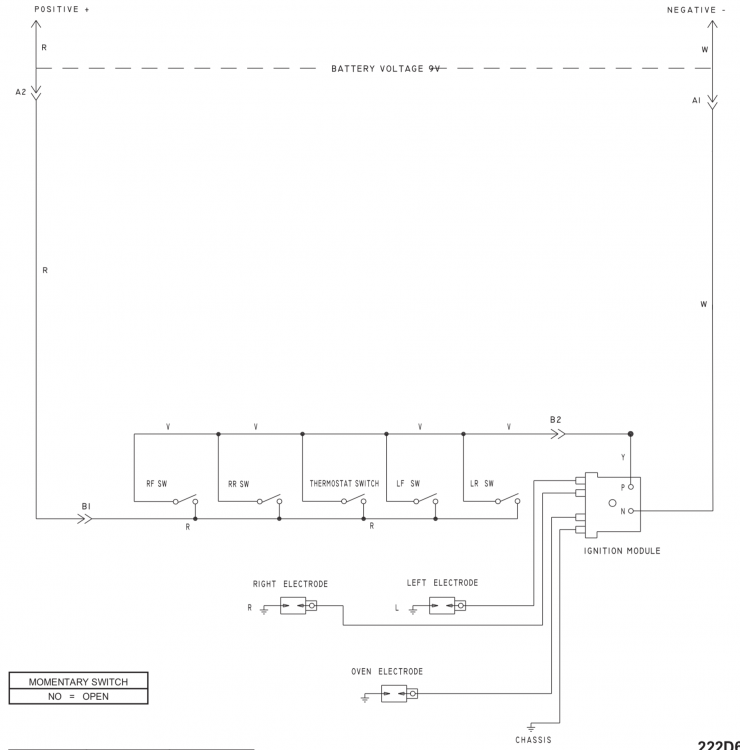 Well that's about as simple as it gets! All mechanical controls -- nothing too fancy going on here.

One thing I will point out is that, while the schematic seems to show a grounding wire coming off that ignition module, the module is actually grounded through one of its mounting tabs. If you look at the picture below, you can see that one mounting tab is plastic, and the other (circled in green) is a metal grounding tab.

EDIT: A small clarification -- that fourth terminal on the spark module is in fact tied to ground. It's just not via an external wire, as you might expect from looking at the schematic. Rather, that terminal is internally wired to that grounding tab. This is because it's an unused terminal of the module -- you can see from the picture below that there's no spade coming out of that terminal (circled in yellow) -- and so it is tied to ground to safely discharge the spark voltage that gets sent to it. 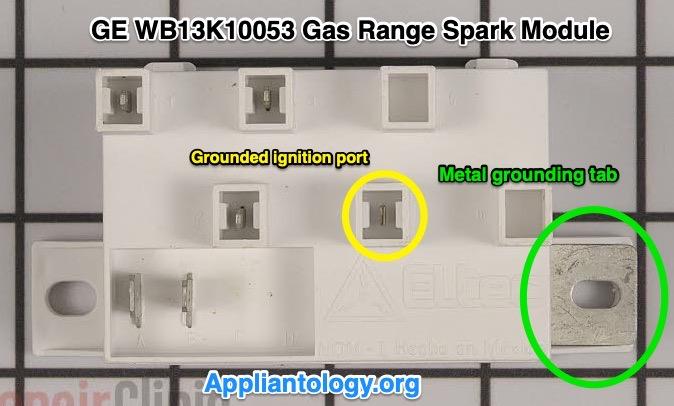 With how simple this machine is, there's only one problem that can really fake you out. What do you do if your battery checks out with a good 9 VDC, and all of your other components check out, but the range still isn't sparking?

Littletexan encountered this, and believe it or not, the problem turned out to be no more than a bad battery. While the battery showed a good 9 VDC when checked without any load, as soon as one of those burners was turned on, that voltage dropped down to 6 volts. This is an interesting twist on the loading down problem I've talked about before. But instead of a defective DC load causing the problem, the problem was a defective DC power supply (battery).

One of many interesting discoveries by the sharp techs around Appliantology! If you want to get in on the action, with access to all of the tech-only forums, manual downloads, and 45+ hours of technical webinar recordings, then click here to become a premium member today.