To follow along with this blog post, you should go ahead and download the refrigerant slider app called "Ref Tools" to your smartphone (don't worry, it's free!). It's the one developed by Danfoss. I'm going to be referencing a few features of that app as I explain some properties of refrigerant, so go ahead and familiarize yourself with it. It's a great tool to have on hand regardless, since it lets you painlessly calculate superheat and subcooling in sealed systems.

Got it? Good. What I want you to do now is open the list of refrigerants in the app and select R-404a, then take a look at the options the app presents you with.

One that's of particular interest is the switch that says Bubble or Dew, depending on which way you have it set. If you have no idea what that means, don't worry -- that's what we're going to break down in this post.

That gives you a general understanding of what those terms are referring to, but just like how you need to look at the math to understand electricity, you have to look at the P-H chart to understand refrigerants. I'm going to assume that you're at least somewhat familiar with these -- if you aren't, we have a great webinar series that will teach you all about them -- click here to watch the first installment. 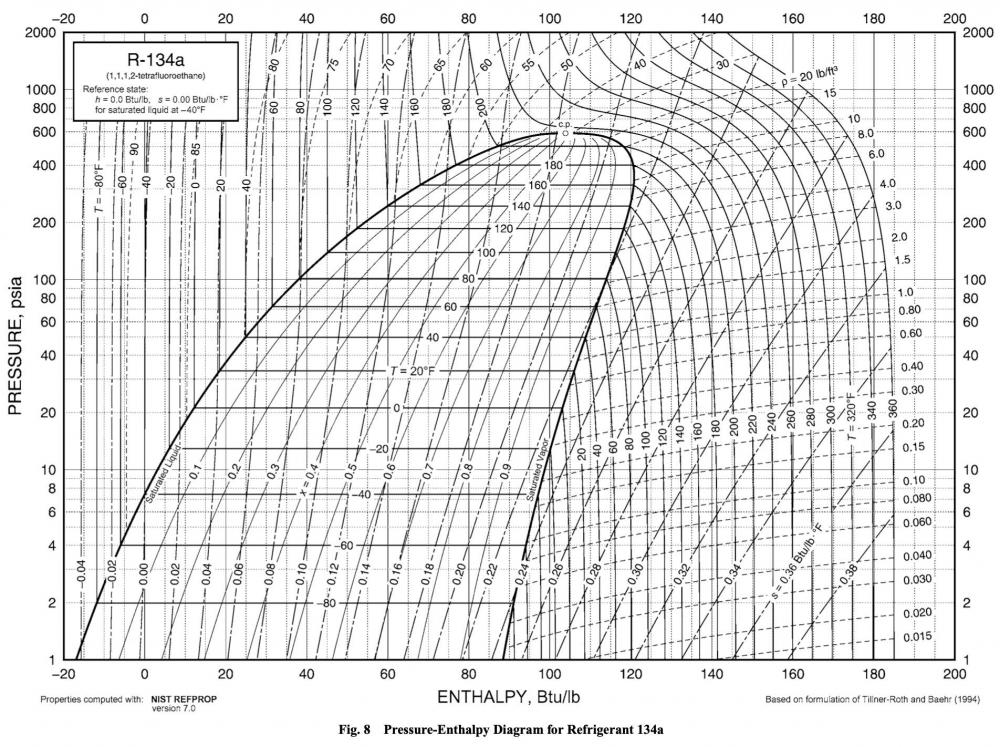 That big dome toward the left side of the chart is fittingly called the saturation dome. That shows the pressure and temperature of the refrigerant while it's at saturation and undergoing the phase change. The left wall of the dome is the bubble point, and the right wall is the dew point.

A quick sidebar about pressure -- we usually measure pressure in PSI (pounds per square inch). There are two different types of PSI, however, and either can be used. You just have to know what they mean. There's PSI Absolute (PSIA) and PSI Gauge (PSIG). The difference between them is that PSIA uses a complete vacuum as its reference. So 0 PSIA is a total vacuum. PSIG, on the other hand, uses atmospheric pressure as its reference. So 0 PSIG is the standard air pressure that we feel at sea level, which corresponds to 14.7 PSIA. 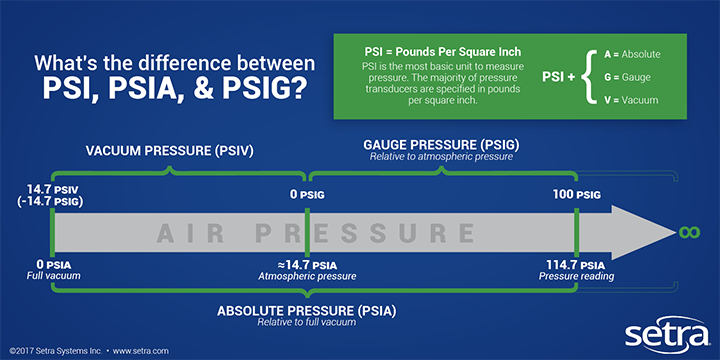 Make sense? Let's get back to the P-H diagram.

If you're paying attention, you should notice that this means there is no temperature difference between the bubble and dew points in R-134a. You can check me on this yourself -- pull up R-134a in the Ref Tools app, and you'll see that it doesn't give you the option to select Bubble or Dew. 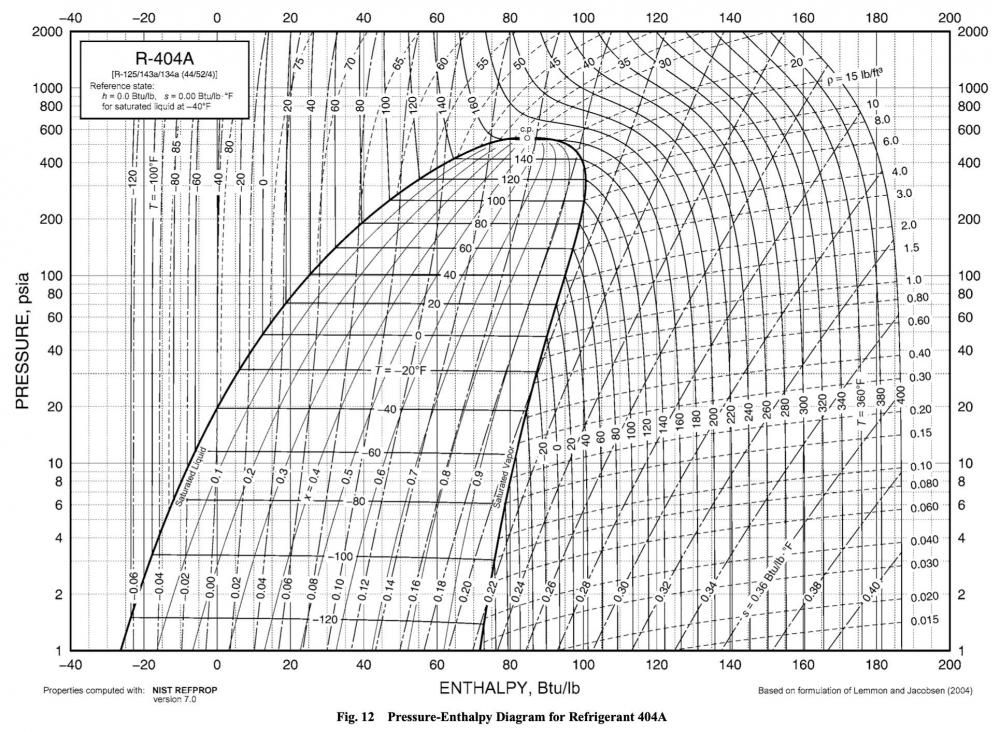 Can you spot the difference? The temperature lines in the saturation dome are no longer completely horizontal. R-404a is a different substance than R-134a, with different properties. One of those properties is that bend in the temperature lines that you're seeing, which is called glide. Glide means that what temperature you have at a given pressure depends on where you are in relation to the bubble and dew points. Everything isn't consistent within the saturation dome.

R-404a has relatively gentle glide, so for demonstration purposes, here's another refrigerant's P-T chart. This one is for R-407c. 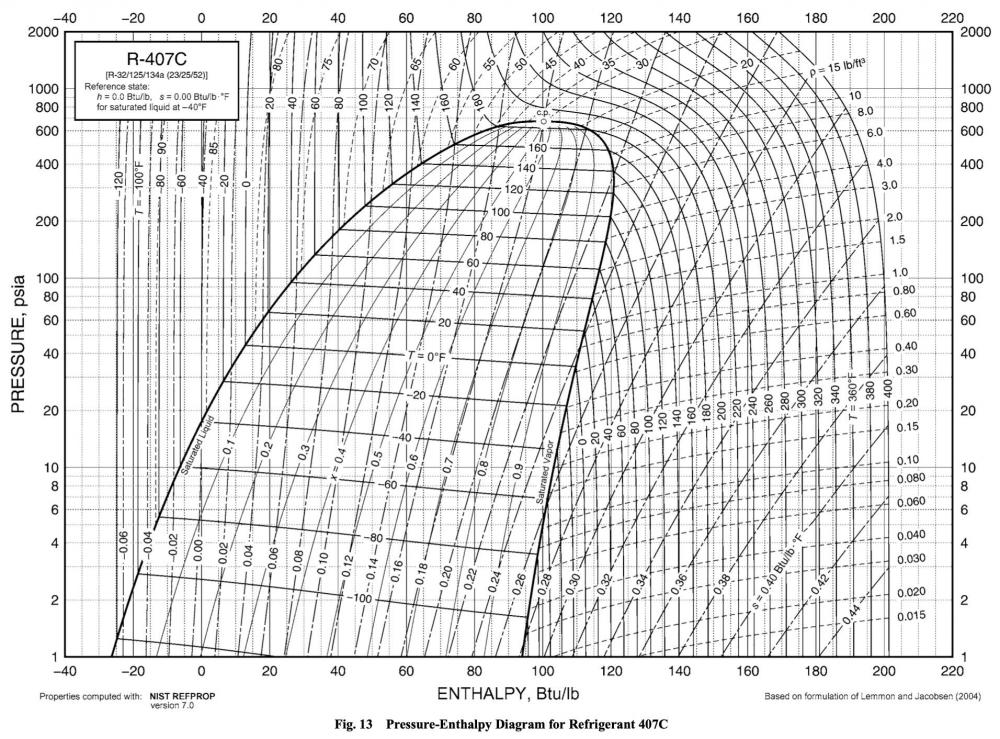 Now that's some glide! You've got very different temperature-pressure correlations depending on where you are in the dome.

You should now have a decent idea of what that Bubble/Dew switch does in the Ref Tools app. It's letting you select which side of the saturation dome you want to use for your calculations. And this is something that's only important for refrigerants like R-404a and R-407c. These refrigerants are in a category called zeotropes. What that means is that they are refrigerants comprised of a mixture of two or more substances with different boiling points. That difference in boiling points between the constituent substances is what creates glide within the saturation dome. R-134a doesn't have glide because it's not a zeotrope -- it's just a single, homogenous substance.

Why is it important to know all this about glide, zeotropes, bubble, and dew? Well, if you don't know how to use that Bubble/Glide switch in your Ref Tools app correctly, you could make some serious miscalculations when troubleshooting a sealed system using any zeotropic refrigerant, specifically when it comes to calculating subcooling and superheat. Subcooling all takes place on the left side of the saturation dome. As such, you must calculate subcooling based on the temperature-pressure relationship at the bubble point. Similarly, you must calculate superheat based on the temperature-pressure relationship at the dew point.

This may not seem like a big deal for refrigerants with very little glide, such as R-404a, but try pulling up R-407c in your Ref Tools app. Let's pick a nice, round pressure -- 10 PSIA. With Bubble selected, that corresponds to -60 F. Now switch it over to Dew, and with the same pressure, you instead get -48 F. (For extra credit, you can double-check the app's calculations by using the P-T chart above.)

That's a significant difference -- 12 degrees! Enough of a difference that it could totally throw off your troubleshooting, all because you didn't know about glide in zeotropic refrigerants.