The most basic circuit safety device that everyone is familiar with is the circuit breaker. All a breaker has to do is detect if the amperage in its circuit exceeds a certain threshold and open the circuit if it does. Simple and effective, but not every electrical hazard involves excessive current. In fact, having less current than you should can also indicate a serious safety issue. Enter the GFCI and the AFCI.

You might already be familiar with GFCIs (Ground Fault Circuit Interruptors) -- in fact, it's very possible that you have a couple devices plugged into one right now. A GFCI is a relatively simple device that can be installed in a standard electrical outlet. It's intended to immediately open a circuit if it detects any current leaking to ground. The GFCI does this by measuring the amount of current moving through line and comparing it to the amount of current moving through neutral. If there's any significant imbalance, then the missing current must be leaking into ground -- that's what's called a ground fault. The GFCI detects this and opens the circuit, preventing any potential electrocution or house fires.

AFCIs (Arc Fault Circuit Interruptors) are a little more complex. These electronic devices aren't concerned with the amount of current, but rather with its wave pattern. 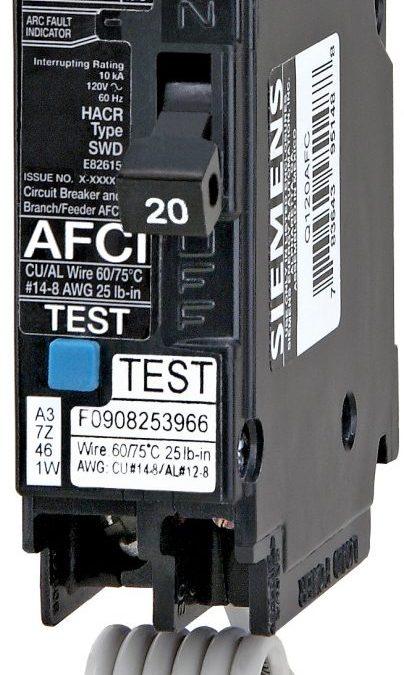 An arc fault is when current flows through an unexpected path -- such as between conductors that are not properly insulated from each other. When this happens, you may not have any missing current flowing to ground, which is all a GFCI can look for. And you certainly wouldn't have the high-current situation that a circuit breaker is designed for. In fact, the usually high resistance of an arc will significantly lower the circuit's current. And yet arc faults still pose a significant fire hazard, since an unaddressed arc fault quickly heats up and leads to a fire.

Enter the AFCI. These devices are programmed to recognize the kinds of electrical wave patterns that indicate an arc fault. This turns out to be rather complicated, since there is some amount of arcing that is acceptable. Every time a switch actuates on an appliance's relay board, for example, there is a small amount of arcing. So the AFCI needs to distinguish between safe and dangerous arcs. They do this by having a catalogue of acceptable waveforms programmed into their memory chips. Thousands and thousands of wave patterns that it needs to be able to recognize and allow.

On the whole, AFCIs do their job very well. But they're not perfect, and sometimes a particular appliance comes along with a wave pattern that is perfectly safe, but not permitted by the AFCIs database. This is when you can get nuisance tripping.

When you encounter an appliance that is tripping an AFCI, your first job is of course to determine that it is, in fact, just a nuisance trip. If you do, what then?

There are a few things you can do. First, you can simply plug the appliance into a non-AFCI outlet. Not ideal, but sometimes necessary. Refrigerators especially can have a hard time when plugged into either an AFCI or a GFCI. For example, as they age, their compressor windings can sometimes develop very slight leaks to ground. Not enough to impair function, but enough to make a GFCI trip. And the last thing any customer wants is to open up their perfectly healthy refrigerator only to find that it hasn't been running all night because of a nuisance trip.

The other option is to plug the appliance into a plug-in surge suppressor. Why would this help? Remember that AFCIs are on the lookout for jagged, arky-sparky waveforms. A surge suppressor just so happens to smooth out jagged waves like that. That's part of its job. So if you have a customer with a normally functioning appliance that keeps tripping an AFCI, try plugging in a surge suppressor (it should be plugged into one anyway, so you're doing a service either way).

If you want to learn more detail about GFCIs and AFCIs, check out this awesome webinar recording, available only to our premium members. Click here to become a premium member today.