For those of us techs based in the States, it can be easy to think that electricity just "happens to exist" as our familiar 120/240 volt split-phase power. But that's only one of many forms that electrical power can take. It can come in a variety of voltages and phases, all depending on what standard a particular country or region decided upon.

Before we get into it, there's one important thing for you to keep in mind: just about anywhere you are, the electricity that is generated in power plants and sent into the power gird is three-phase, even in North America where we most often use split-phase power. But once that power reaches a destination, different things happen to it depending on the area where you live.

120/240 volt split-phase: This configuration is (hopefully) very familiar to all of the Brethren in North America, since it's what basically all individual residences run on. A single one of those three phases (carrying around 7,200 volts) splits off from the power line and heads toward a transformer by a residence. The image below shows what the transformer does.

What you're seeing is the transformer stepping down the voltage to a more manageable 240 volts. The split phase happens because of the neutral. It physically connects to the transformer secondary coil at its midpoint, "splitting" that 240 volts into two legs of 120 volts wrt neutral.

This power configuration gives the flexibility of using just one of the lines and neutral for lower 120 VAC power applications -- anything from light bulbs to refrigerators -- while still allowing you to use both lines for 240 volt applications that need more oomph, such as electric dryers and ovens.

120/208 volt three-phase: This is the other type of power configuration you'll see in North America, many times in commercial/industrial settings or large apartment blocks. Here the building gets all three phases from the power lines, not just one of them. 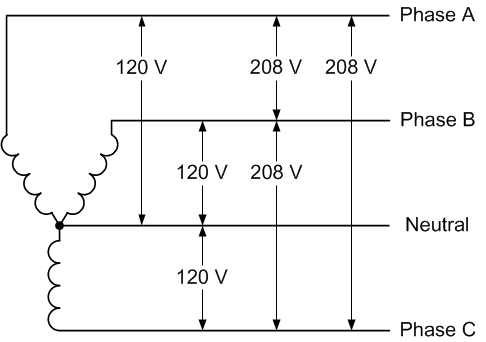 Here, rather than the neutral tapping into the center of a coil, it connects to the center of a Y-like configuration of coils. With this configuration, any of the three legs has 120 VAC wrt neutral. So you can power 120 loads with one leg and neutral, and 240 loads by using two of the legs, just like with split-phase power. You can even use all three legs to power three-phase loads, such as three-phase motors -- that's one of the reasons why you see this power supply in industrial settings.

However, you might have noticed something less intuitive about this power supply, especially if you're used to split-phase power. If you measure any two of the three phases with respect to each other, you get 208 volts, not 240. This is because we're not dealing with two phases that are 180 degrees out of phase, like we are with split-phase power. Instead, each phase here is only 120 degrees out of phase. Doesn't matter if you don't know exactly what that means -- the takeaway is that you can't use simple arithmetic to calculate the line-to-line voltage from the line-to-neutral voltage in three-phase power. You just have to remember that it's 120 line to neutral, but 208 line to line.

230/400 volt three-phase: Now that you've learned about how three-phase power works in North America, there's actually not too much that's new about European power. In fact, it works basically identically to the 120/208 configuration, just with higher voltages. 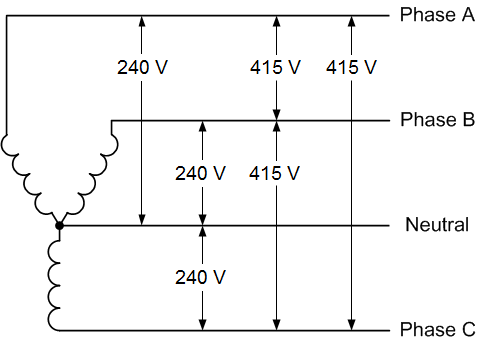 So there you have it -- a quick rundown of the most common power configurations that you'll encounter as an appliance repair tech. Want to learn more of what you need to know to be an ace tech? Click here to check out our online, cutting edge appliance repair courses at the Master Samurai Tech Academy.