I've seen a few guys around the forums ask the same question: are surge protectors (also called surge suppressors) safe to use on refrigerators?

Best I can figure, this question comes from folks mixing up surge protectors with AFCIs and GFCIs (you can click here to read about how those devices work). But it speaks to a general ignorance of how surge protectors work. Well, why don't we fix that?

The reason surge protectors exist is to block voltage spikes -- those are large spikes in the supply voltage that last a few nanoseconds. Lightning strikes are one of many causes of these spikes. Despite how short these spikes last, they can still cause significant damage to electrical devices, especially ones containing electronics.

There are a few different kinds of surge protectors, but we'll focus on the simplest and by far the most common kind: Metal-Oxide Varistor (MOV) surge protectors. These devices are so simple, in fact, that you can get a sense of how they work based on a picture like this:

There's very little going on here, and the only components that might be new to some techs are the varistors. So what's a varistor?

It's not too hard to wrap your head around these, either. A varistor is a component whose resistance changes depending on the amount of voltage applied to it. In the specific case of MOVs, the resistance is very high, but lowers the more voltage is applied. This is why they're called varistors -- it comes from "varying resistors". Here's what one looks like: 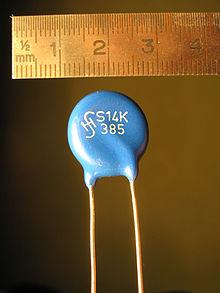 You might be getting an idea of how MOV surge protectors work now. With normal voltage applied to the row of MOVs connecting line and ground, those MOVs will be open. No current will flow through them. But if the voltage rises above a certain amount, the resistance of the varistors will drop, and all the current will get shorted to ground rather than continuing through the circuit. The typical spec for this in America is 330 volts. Above that amount, the varistors' resistance will be low enough to short to ground.

Want to learn more about the technology used in appliances and how it factors into your troubleshooting? Click here to check out the Core appliance repair training course at the Master Samurai Tech Academy.