Ohm's law, meaning the set of simple equations that define the relationship between voltage, current, resistance, and power, is an essential tool for appliance techs. Not only is it the cornerstone of understanding electricity, but it's also an invaluable troubleshooting tool. This said, there are some loads to which the simple form of Ohm's law doesn't apply. The simple form of Ohm's Law only takes into account real resistance (ohms) but does not consider other ways that electron movement can be opposed, such as inductive reactance or capacitive reactance-- these types of opposition to electron movement is called impedance. More on that in a moment.

These loads are called non-ohmic loads, and they're far more common than you might think. Motor windings and solenoid coils are both examples of non-ohmic loads that we encounter all the time in the field. "Normal loads", to which Ohm's law applies normally, are called ohmic loads. These are things like light bulbs and heating elements.

So what makes this difference between ohmic and non-ohmic loads? Why does Ohm's law apply to one and not the other?

The difference between them boils down to this: In an ohmic load, when you increase the voltage to the load, the current increases at a consistent rate. In math terms, we say that current increases linearly. On the other hand, with non-ohmic loads, increasing voltage still causes an increase in current, but at an inconsistent, non-linear rate. In other words, you can't easily predict what current will be moving through that load given a certain voltage.

The graphic below demonstrates this nicely. 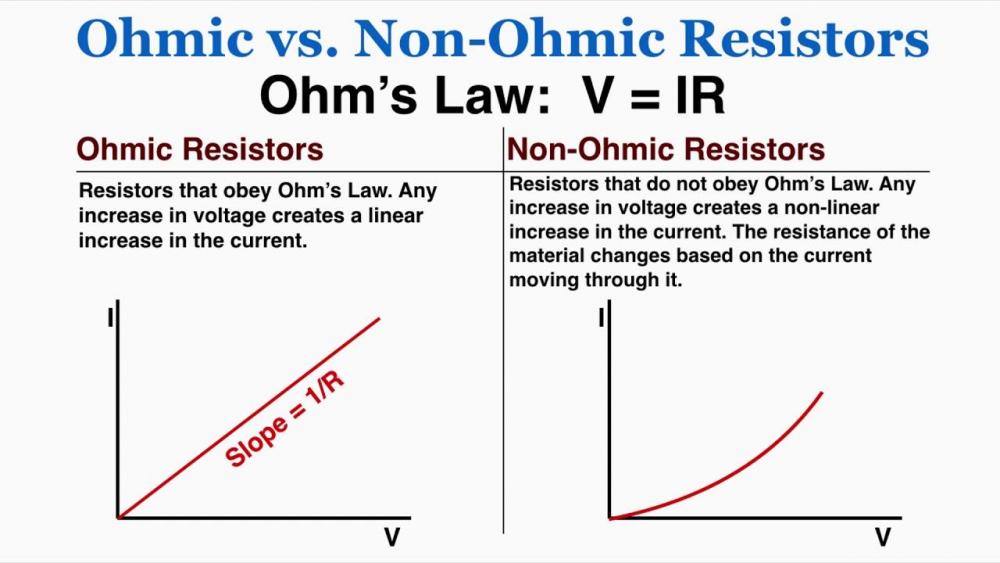 What this means is that, for non-ohmic loads, simple resistive ohms don't tell the whole story. That's because devices like motor windings and solenoids are inductors. In fact, any coil that has current flowing through it is an inductor. Inductors have another property besides resistance that contributes to how much they impede the flow of current: reactance. When you combine the resistance and reactance of a load, you get the full scoop on how much it resists current. That combined value is called impedance.

It's not important to get into the nitty-gritty of reactance and impedance. We don't measure these properties as appliance repair techs. But it's critical that you know that they exist, because you need to know the limits of ohms testing.

Ohms testing is a useful tool when it's expedient. There are plenty of situations where it's an effective preliminary test. If something tests out of spec on ohms, then you know it's bad. But if it tests good, then you have to keep digging -- an in-spec ohms reading is not conclusive. What's more, as we've just learned, you can't even use ohms as a helpful data point in every situation, and ignorance of this fact can lead to all kinds of confused troubleshooting.

As an example: you measure the resistance of a motor winding and find 6 ohms of resistance -- and that's what the spec in the tech sheet says it should be. Based on its 120 VAC power supply and Ohm's law (I = E/R), you might think it would carry a whopping 20 amps when energized. That seems like a lot! Curious, you energize it and clamp on your amp meter. Instead of 20 amps, you see a significantly lower 7 amps. Is there something wrong with the motor? Is the spec wrong? Is Ohm's law wrong?

The only thing that was wrong was that you were only seeing half of the picture. That's a perfectly healthy motor with a significant amount of reactance, which heavily reduces the current flow. But that's not something you'll be able to pick up with a simple ohms check.

Want to learn what you need to know to be a master technician? Click here to sign up for our online, cutting-edge appliance repair training today.