Here is a clear and simple explanation of understanding the differences between 120v single phase, 240v Split Phase, and 208v 3-phase from Academy Fellow Keinokuorma:

There have been multiple threads discussing this electrical topic. Because of increasing demand of this information, I will try to explain this shortly and comprehensively.

On the background there is the three-phased transmission network. This is wired by three separate wires that normally hang adjacently along rows of poles. The voltage between each wire is 11kV, and the waveform graph drawn for each wire's voltage (and current too) are one third of a cycle off each other. That is, there is a 120 degree phase shift between each live wire's waveform, 360 degrees being one full cycle.

The relatively high voltage for the transmission network is selected, because there are two interesting laws about power. First, by principle, electrical power taken by any load can be calculated by multiplying the current flowing through the load, by the voltage over the load. Second, wattage loss at transfer can be calculated by multiplying the transfer line's resistance, by the square (or second power) of the load current. Therefore, for transmitting the same power, if double voltage is used, half the current is needed, and 75% less power is lost on the trip! Let's just say that if they use 11kV instead of 110V for transfer (100x voltage) they need the hundredth of current, and lose only a ten thousandth of power in transit, compared to the idea that it was 110V all through the Great United States of America. The other choice would be using at least one hundred times thicker wire, which is not reasonable at all.

It is not safe to feed this high voltage directly into households. Instead, the voltage from the transmission network will be stepped down by transformers. The usual layout is that single-home buildings have their own stepdown transformers, and larger residential buildings in big cities may have one or a couple larger transformers.

120V: First off, the standard household voltage in North America is 120V AC, 60Hz. Most appliances are designed for this. There can be some variations in the voltage depending on the load and condition of the network. The stepdown transformer has its primary winding wired between two of the three transmission wires.

Due to growing demand of electrical heating (in dryers, ranges, water heaters and sometimes house interior heating) a system has been required that allows usage of 120V designed electronics, and is capable of providing more power for the household. For the same reason that the transfer network doesn't work with such a low voltage, the single 120V circuit can only give so much power without the power loss becoming astronomical. There are two methods used to avoid this while keeping compatibility.

240V or split phase: For small residential buildings, the usual method is to rig up a 240V stepdown transformer (instead of 120V) in which the secondary winding is split into two 120V windings (hence the name "split phase"). The center tap is then grounded and fed to the house as if it was the neutral wire of the old 120V system, and each end is wired as a separate 120V live wire. Their waveforms have a half-cycle offset, or 180 degrees, when measured against the neutral wire. The normal 120V designed machinery does not care which live wire you use for them as long as you connect them between a live and neutral wire. Appliances in the home can be distributed on either live wire to maintain balanced loading, and when heating requires high power, the concerned appliance can be connected to both live wires to operate the heating element, providing 240V for it.

208V: For larger residential buildings and blocks especially in big cities, as well as shopping malls etc, there is a system made out of two or three phases. In these cases, one or more of full three phase stepdown transformers are used to feed power to the building. These transformers have three primary windings, each wired between two of the transmission wires, in a triangular fashion. There are also three secondary windings on such a transformer. Normally these are coupled at one end, the center tap is grounded and fed into the house as the neutral wire, while their other ends are fed into the house as separate live wires. Each live wire reads 120V against the neutral point, and between any pair of live wires, you get the reading of 208V. Then, each home in the building is fed with two or three of these live wires as well as the neutral. The rest happens much like on the split phase. Appliances can be distributed on different live wires, and heating elements will be connected between two live wires.

If you operate a 240V designed device on a 208V system, often you will not notice much retardation in the performance. It WILL cause your oven, stove or dryer to reach selected temperature slower, and the thermostat will therefore cycle on for longer periods. However, total energy consumption is not greatly affected.

Be aware that mismatching a 208V designed device into a 240V system will cause the element(s) to produce 33% more heat than they are designed for. This will greatly shorten their life span and may cause fire hazard. Temperature in the oven, stove or dryer will probably fluctuate more than what is desirable, and the thermostat will cycle on for short periods. Especially in the case of the dryer, the risk of fire hazard is high.

I will add more pictures when I have drawn some decent ones. Meanwhile, here is a haphazard hand sketch. 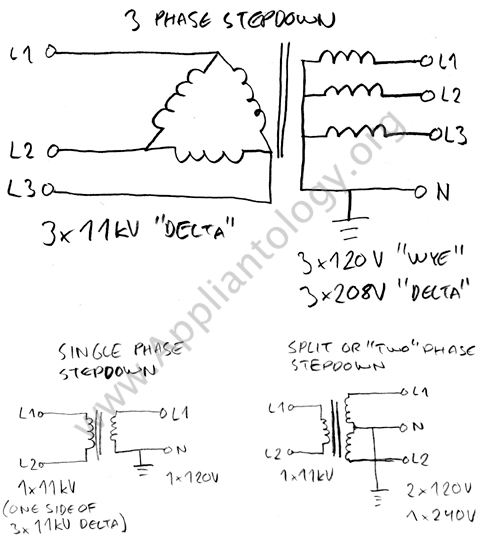